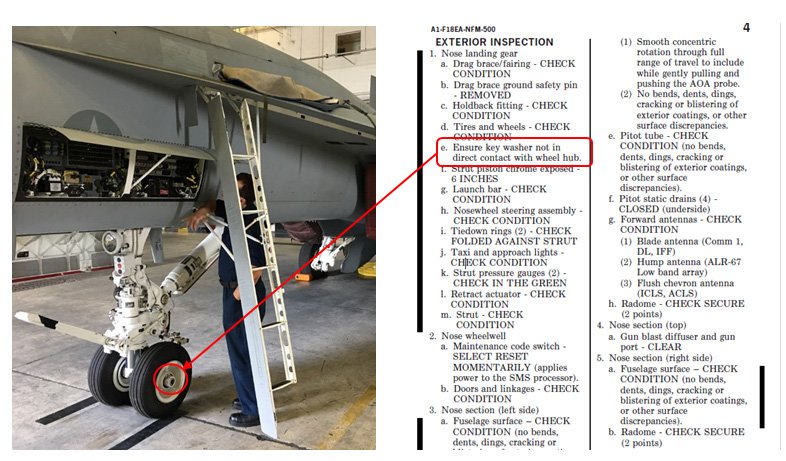 In the US Navy, Strike Fighter shortage is an immediate, critical issue. Great strides have been made due to the collective effort of the Fleet Readiness Centers and The interesting aspect of using AR/VR/Gaming Technology for teaching tasks such as aircraft preflight is that the student has the ability to visually practice this task in the comfort of the ready room without utilizing expensive resources or exposing themselves to the flight line. Not only can these systems teach the subject more effectively than a Powerpoint lecture, but they can actually be developed to verify that the student has actually taken the time to properly preflight the aircraft (an often common occurrence when the student feels rushed on a solo flight).

Naval Aviation has experienced mishaps from simple preflight maintenance mistakes. After a rapid replacement of one of the nose tires in the nose landing gear, the maintenance crew failed to install the spacer bearing in the nose wheel assembly and the mistake went unnoticed by quality assurance. As a final precaution, the pilot is required to check the spacing on preflight as shown in Figure 1. The FA-18 experienced a catastrophic dual engine failure and loss of aircraft upon catapult launch when the pilot failed to notice that the nose tire key washer was in contact with the wheel hub (FA-18 EXTERIOR INSPECTION Step 1e in Figure 1 below).

One of the authors of this technical volume nearly lost his life during a 1 vs 2 Air Combat Maneuvering Flight in his Fleet Replacement Squadron. The mission was to engage two F-5 aircraft with his FA-18. During the engagement, the pilot of the FA-18 followed one of the ‘bogey’ aircraft in a climb and attempted to achieve a radar or heat seeking missile lock by pointing directly at the aircraft. This maneuver is called bore-sighting the bogey and will usually assist the system in attaining a lock. Unfortunately, both systems were not working properly and failed to get a lock. The FA-18 pilot was so engaged in using his systems, he did not realize that both aircraft were quickly running out of airspeed in the climb and that he was below the F-5. Instead of performing a timely maneuver to lag behind the other aircraft, the FA-18 pilot put himself into a dangerous position when the bogey ran out of airspeed and fell out of the sky toward him. Later analysis showed the aircraft missed each other by 150 feet. This is well inside the mandatory 500 foot minimum safety distance or ‘bubble’ allowed during training.

Another recent training event that ended in an actual midair collision was in October 2012. During a 4 vs 4 Offensive Counter Air Mission, a new squadron pilot, or ‘Nugget’ was flying in the role of the bogey. At the merge, the Nugget pilot aggressively pulled lead on one of the ‘blue’ fighter aircraft to engage and shoot him with his gun. Due to some confusion, the blue fighter thought the fight was over and stopped maneuvering. The bogey pilot did not realize this and continued to lead on the other aircraft, not recognizing the dangerous situation developing. The lead aircraft was unable to maneuver out of the bogey’s flight path and the two aircraft collided, instantly destroying them and resulting in the loss of four aircrew. The investigation reported that a failure to recognize a constant bearing and decreasing range was the causal facture of the mishap.

The ability to improve training by shortening training times represents an important key to the future success of training and simulation. Current methods for training evaluation such as pre and post training questionnaires, demographic data, and measures of performance, often do not provide trainers with all the necessary information or insight to improve a trainee’s performance. In addition, current data points are difficult to integrate into a coherent profile of the trainee due in part to the variety of formats (e.g., paper and digital) with different fidelities (e.g., tracking data can be every second of training while post training questionnaires happen once). The goal is to fuse all of this data into a single coherent profile of the trainee to improve future training accuracy and retention. With this information, training can be completed more effectively using fewer resources.

We were delighted to receive our dual extruder 3D Printer yesterday manufactured by Sycnronetics. It’s plug and play, and so easy to use that our team of non-engineers can print Training and Mission Planning/Rehearsal tools. Dual Extruder,  16×16 Flat bed, portable, durable, fully enclosed printer. So far it prints like a dream –  consistent and quick. 100% made in the USA. Leap forward for AVATAR, and many thanks to our partner Syncronetics (www.syncronetics.com)!